Astounding Facts About Meerkat Habitats That are Sure to Stun You 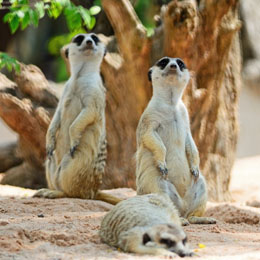 Curious-looking faces casting inquisitive, kohl-eyed glances – that’s meerkats for you. Find out more about the meerkat habitat and some other facts regarding these creatures from this article.

Meerkat are natives of the Kalahari Desert which ranges across South Africa and Botswana. They are mammals, and are very close relatives of the mongoose (you will notice quite a significant resemblance in the slender built, quick-footed movements, and exceedingly inquisitive nature). They are extremely sociable creatures who are always part of a large group consisting of 20-30 members on an average. Meerkats are foraging mammals and they build underground networks of tunnels by burrowing into the ground. The burrowing habit, apart from the necessity to build themselves a shelter, comes from their dietary preferences which consist of insects, scorpions, and centipedes, which are mostly dug up from the ground. Therefore, the meerkats’ habitat and diet are significantly linked with each other.

The natural habitat of meerkats comprises burrows, that they dig themselves, in the ground lined with grass. They are native to the Kalahari Desert covered areas of South Africa and Botswana. Meerkats often share their burrows with ground squirrels and yellow mongooses. Sometimes, albeit unknowingly, they also share burrows with snakes, which often results in tragedies.

Their peculiar underground tunnel system consists of several deep and long burrows interconnecting with each other to form a labyrinthine network of underground pathways. There are usually several entrances to this underground habitat and meerkats are fiercely protective of their territory, often fighting till death to protect it. Different groups of meerkats mark their territories with scent.

Being extremely social animals, they can be often seen grooming each other within the group and babysitting each other’s pups while the parents are away. Females who have not had a litter before are often seen playing with and lactating pups of other females. Meerkats exhibit a strong socially-altruistic behavior insomuch as they take turns acting sentry to alert the group of approaching predators or other dangers.

Some Random Facts
As much as they are social and altruistic, often laying their own lives down to save other and younger members of the group, meerkats have been known, every now and then, to kill the young of dominant pairs to better the position of their own offspring in the group.
Meerkats are immune to the venom of the scorpions of the Kalahari desert, and these arachnids are included in their diet. Besides scorpions, they also feed on other desert life forms such as lizards, small snakes, spiders, centipedes, millipedes, smaller mammals, eggs, small birds, plants, etc. However, they are primarily insectivores.
Meerkats can produce litters any time of the year, though most reproduce during the warmer months. A litter consists of 2-5 pups on an average.
Despite its portrayal and subsequent popularity on television, having meerkats as pets is a bad idea, as these are wild animals that do not bond well with humans. Keeping one as a pet may result in nasty bites, damaged furniture, chewed wiring, and torn drapery – in short, an utter mess where a home used to be.
A careful understanding of meerkat habitat, facts, and habits will tell you that these creatures are best left in the wild among their kindred. These are nervous and high-strung animals, and they literally go crazy when kept in solitary confinement. Even keeping a pair doesn’t suffice, as they are most comfortable in a group of a couple of dozen. The name meerkat has been borrowed from the Afrikaans word for marsh cat.