Can you Keep Raccoons as Pets?

16
Can you Keep Raccoons as Pets? 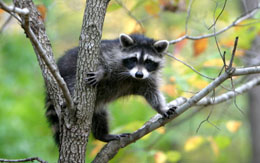 Do raccoons make good pets? Can you keep this nocturnal species in your home? These are some of the most FAQs in forums dedicated to exotic pets. If you have been contemplating the idea of owning a pet raccoon, here are a few things that you need to take into consideration.

The trend of keeping exotic pets has fast reached epidemic proportions, with every other person interested in keeping some or the other wild species of animal as pet. Among these wild animals which people wish to keep as pets, one oft-featuring species happens to be the raccoon (Procyon lotor). With its innocent face, a raccoon can easily melt your heart and make you think about adopting it. However, behind this innocent face of a raccoon lies its unpredictable, aggressive nature; and going by this nature, it is indeed a bad idea to keep this animal as a pet.

Why it is Not Good for You?

As in case of other wild animals which people are eager to own, even raccoons can be kept in a cage inside your house. That however, would mean keeping it in captivity, and as a pet. A pet animal would be one which you can allow roam freely in your house; dogs and cats are apt examples of the same. On the contrary, allowing a raccoon roam around freely in the house is like calling for a disaster. With its sharp claws, this animal can cause serious damage to your property and create havoc in your living room. More importantly, the aggressive nature of raccoons is such that they can even attack humans when they feel threatened. The aggressive behavior of a raccoon is at its peak during the mating season, wherein the animal can display behavior such as biting – which even though perfectly natural for them, can be quite harmful for humans. With its unpredictable, aggressive nature and sharp claws, raccoons can be quite harmful for humans – especially children, and hence are best avoided.

It’s not just about the aggressive nature of this species, but also about the health issues that you become vulnerable to when you keep wild animals as pets. Even veterinarians advice against adopting animals caught in wild as these animals are known to carry several infections on their body. In fact, these zoonotic diseases i.e. diseases transferred from animals to humans, can turn out to be life-threatening for you as well as your family members. One of the major health threat for people who keep a raccoon as pet is that of rabies, as this mammal is known to be vulnerable to this disease. The nocturnal behavior of a raccoon happens to be yet another good-enough reason for you to drop the idea of keeping this species as a pet.

Why it is Not Good for the Animal?

While that was all about the human perspective of keeping raccoon as a pet, the idea is not good for the species either. But obviously keeping wild animals as pets is as bad for them, as it is harmful for you; and raccoon is no exception. There is no questioning the fact that raccoon makes you vulnerable to diseases like rabies. In captivity though, the animal itself is vulnerable to health issues, such as obesity, which are likely to surface as a result of poor diet and lack of exercise. With no idea whatsoever about their diet in wild, many people tend to feed their pet raccoons with foods which are not ideal for them, and that, in turn, results in adverse effects on their health. For instance, feeding cat food to raccoons results in development of gout in this animal.

At times, people keep raccoons as pets only to repent later on, when they are introduced to the aggressive nature of this animal. And when they do repent, they simply try to release it in the wild which is again dangerous for the animal. It becomes very difficult for the animal to get accustomed to the conditions in the wilderness after spending time in captivity; and this makes it vulnerable to predation by other species in the wild. A pet raccoon released in wild is also likely to succumb to hunger, as it is used to spoon-feeding in captivity.

All these arguments against adopting raccoons are not just restricted to these species, but are also applicable to other wild animals of the world. While the idea of keeping animals like rabbits as pets is not a good idea as you can end up harming them, the idea of keeping animals like raccoons is not a good idea because they can end up harming you!