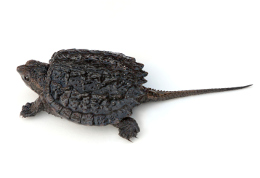 The alligator snapping turtle is the largest freshwater turtle in the world with regards to weight. It is also a threatened species. This article provides some more facts about this animal.

Alligator snapping turtles, binomial name Macrochelys temminckii, are the largest freshwater turtles in the world. They are the last surviving species of the genus Macrochelys. They are found mainly in the waters of the southeastern US. They are found from the east of East Texas to the Florida panhandle, western Kentucky, southern Indiana, southeastern Iowa, and western Illinois among other places
They are mostly found in the rivers that drain into the Gulf of Mexico. The center of their distribution is the Mississippi River. The largest of these species are found in the Southern US waters. The smaller species are known to inhabit the lakes and even the streams from South America to Canada. They are known to be less aggressive as compared to the common snapping turtles.

Appearance
These turtles have a large head, and a long and thick shell with three ridges on its back. These ridges have three rows of spikes and raised plates, which distinguishes this creature from the common snapper turtle. They can be gray, black, brown, or olive-green in color, and are covered with algae. Although they attain maturity at 16 years of age when their length is 38 cm (15 inches), they continue to grow throughout their life. Males have an average shell length of 26 inches (66 cm) and weigh roughly 175 pounds (80 kg) whereas females are known to weigh only 50 pounds (23 kg). The inside of its mouth is camouflaged, and it has a bright-red worm-shaped appendage at the tip of its tongue, which it uses to lure fish to eat. They can stay submerged in water for 40 to 50 minutes before they resurface for air. Due to their appearance, they are many times called ‘dinosaurs of the turtle world’.

Food Habits
These turtles are almost completely carnivores. Their diet normally consists of fish and fish carcasses, carrion, molluscs, and amphibians. However, they are also known to eat snakes, worms, water birds, crayfish, aquatic plants, and even other turtles. They can also eat aquatic rodents and mid-sized mammals such as squirrels, raccoons, opossums, or armadillos. They usually hunt at night. During the day, they sit at the bottom of the water and attract fish using their tongues.

Lifespan
These turtles reach maturity at 12 years of age. They normally live from 80 to 120 years in the wild and 20 to 70 years in captivity.
They breed every year in early spring in the southern part of their habitat and late spring in the northern part. The young turtles are born 100 to 140 days after the eggs are laid. The gender of the young ones depends on the temperature at which they are incubated. The females prepare the nests at least 50 yards away from the edge of the water to prevent them from flooding.

As Pets
This species is usually bred in captivity. They are quite popular in the exotic animals trade. They are not exactly a good option for keeping as pets as they have many specific requirements of temperature and food, and also due to their large size. They are not normally prone to biting unless they feel threatened. However, hand-feeding them is not advisable. If they do bite, they can seriously injure a person and even amputate fingers. In states like California, which is not their natural habitat, keeping them as pets is prohibited.

Threatened Species
The International Union for Conservation of Nature (IUCN) has put this species under the threatened list, although it is not endangered as yet. Their population has reduced due to their being captured for the exotic per trade, being harvested for meat, and even due to destruction of their habitat.

However, it is now endangered in some states like Kentucky, Illinois, Indiana, and Missouri. They are now protected by the state laws.