No Peace on Land or Water for These 5 Endangered Amphibians 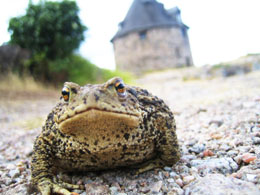 Amphibians are special four-legged vertebrates, that dwell on both land and water. They are cold blooded and take on the temperature of the environment. Born with gills, these creatures develop lungs on maturity, and the most amazing part is that they can breathe through their thin skin. However, over the past few years, the number of amphibians existing on the planet has reduced considerably.

While the exact reason for amphibian extinction is not known, factors like destruction and modification of their habitats (rapid urbanization), depletion of the ozone layer, increasing levels of environment pollution, changes in global temperature, etc., can be held responsible. Today, one third of the approximately 6000 amphibian species, come under the endangered animals category, and are on the verge of facing extinction. Some of the different endangered amphibians are as follows:

Blanchard’s Cricket Frog (Acris crepitans blanchardi)
This tiny, non-climbing member of the tree frog family, was found commonly dwelling in the ponds of southwestern Wisconsin, prior to the 1970s. However, during the 1980s, their population rates reduced rapidly. Scientists were shocked to find that cricket frogs had disappeared completely, from areas where they were previously found in abundance. In a survey conducted a decade later (1991), it was found that out of 40 cricket frog resident places, only 19 still housed these frogs. It is believed that these cricket frogs cannot survive in polluted waters, which is the main reason for their decline. They were put on the Wisconsin Endangered Species List in 1982 .

Houston Toad (Bufo houstonensis)
Houston toad, discovered in the late 1940s, lives exclusively in pine or oak forests. These toads are found mostly in the Bastrop County, Texas, after they were completely eradicated from the Houston area in the 1960s. This toad species was federally listed as an endangered species in 1970, and the most immediate reason for its decline was habitat loss, however, factors such as pesticides, automobiles, predators, and drought are also some of the other reasons. Bastrop State Park, the only public land that supports a large number of Houston toads, reveals that their numbers are declining at an alarmingly rapid rate. However, the Environmental Defense has enrolled three land owners in Bastrop to restore and protect their habitat, so this gives us some hope.

California Tiger Salamander (Ambystoma californiense)
California tiger salamander, a native of Northern California is a large and secretive amphibian. Historically, its habitat ranges from Sonoma County (near Santa Rosa) to Santa Barbara County (near Lompoc). They depend on vernal pools for their reproduction, and dwell mostly in large fish-less vernal pools or water bodies. The population of these salamanders is known to have reduced by 50% of its historic range. In 2004, it was listed by the United States Fish and Wildlife Service as a threatened species, however, they were returned to the endangered category, in 2005. Habitat destruction by human interaction and interference, has resulted in the depletion of their numbers.

Sierra Nevada Mountain Yellow-Legged Frog (Rana muscosa)
Natives of Sierra Nevada mountains, these frogs love mountain creeks and lakes, especially isolated pools, sunny river banks, streams, and lake borders. Once upon a time these frogs were abundantly found in the Sierra Alpine Lake, with scores of them running all over the place. However, today 93% of this frog population has disappeared. One reason is the introduction of the non-native trout, by the California Department of Fish and Game to the high Sierra lakes. Since these frogs were adapted to high elevation habitats in the absence of aquatic predators, they were not adapted to fight predators. The trout feed on their tadpoles and juvenile frogs, and if this continues, soon these mountain yellow frogs will disappear forever. Though this species is nearing extinction, the US Fish and Wildlife Service is refusing to place this species under the endangered species list. The Center for Biological Diversity is continuously trying to get them to be listed as endangered, for the sake of their protection.

Since amphibians possess highly permeable skins, and because they spend their lives both in water and on land, they are highly sensitive to environmental changes. Their health indirectly indicates the condition of the ecosystem. Their decline is a clear indicator of how polluted our planet is. Amphibian population is declining rapidly, and if we don’t do anything about it, the possibility of them disappearing forever is very high.