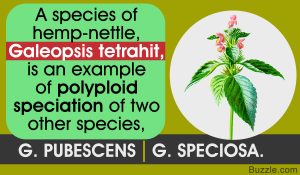 Speciation due to polyploidy discredits the theory of evolution. This is because it is a quick and instant process as compared to the slow and gradual process of evolution.

Speciation occurs due to various environmental reasons. While some species arise due to climatic adaptations, few others arise due to the migration of a species into a new geographic habitat. Such adaptations and migrations give rise to an isolating barrier between the two species. Hence, it is categorized into four distinct types based on the degree of isolation between the speciating populations. They are as follows.

Sympatric speciation is the only type which is caused due to genetic reasons. Mutations and polymorphisms in the genome of a species cause the malfunctioning of cellular processes, resulting in the production of dysfunctional gametes, which when fertilized, give rise to progeny that are genotypically and/or phenotypically dissimilar. Since the gamete themselves are abnormal, the zygote hybrid that is formed does not have the normal number of chromosomes. This anomaly in the number of chromosomes renders the progeny unable to mate with the parental species. Also, the extra/deficit genetic elements alter the genotype and phenotype of the progeny, and hence a new species is produced.

Sympatric speciation occurs via hybridization or via polyploidy. In case of hybridization, the progeny that is produced is just a result of the crossing of two different species of the same genus, and shows the same ploidy level as the parental species. This prevents reproductive isolation. Ploidy refers to the number of sets of chromosomes present in the nucleus of a cell of an individual. In case of polyploidy, the progeny that is produced bears a ploidy level that is different from that of the parental species, and hence reproductive isolation is observed.

Polyploidy refers to the scenario where a cell has more than two copies of its chromosomes. A cell that possess only one set is called haploid, two sets is called diploid, three sets is triploid, and four sets is called tetraploid. However, in general, all cells with more than two sets are called polyploids. In the event that a diploid species gives rise to a polyploid species, an obvious consequence that is observed is that the resulting progeny is incapable of breeding with the diploid species.

This instantaneous reproductive isolation and the possession of a unique genotype and phenotype is the end result of polyploid speciation. This is observed more in case of plant and lower animals. In case of higher animals, polyploid individuals either prove fatal during embryonic birth itself or if they survive, exhibit debilitating health disorders. Polyploidy can occur in the progeny via two ways and they are named, autopolyploidy and allopolyploidy.

In this case, consider a diploid cell that undergoes meiosis I and produces gametes. If the total number of chromosomes possessed by the diploid nucleus is 6 (2n = 6), then a set of chromosomes is made up of only 3. During meiosis, due to molecular and genetic anomalies in the cell, the cell fails to divide into two, and hence experiences chromosome duplication that gives rise to a tetraploid cellular mass (4n = 12).

When this cell undergoes meiosis II, it segregates its nuclear material equally among the two gametes, resulting in the formation of two diploid gametes (unreduced gamete) instead of the normal case of two haploid gametes. Since these gametes are incredibly dissimilar to the parental species gametes, they cannot meld together to form an offspring, hence they undergo self-fertilization, and produce an offspring that is tetraploid, viable, and may be fertile. If it is infertile, it may either adapt and reproduce asexually or it could be propagated via in vitro techniques.

Nondisjunction of chromosomes
Or
Unreduced gametes

Allopolyploids possess chromosomes derived from the mating of two different closely-related species. Consider two diploid species, A & B, where 2n = 4 for A and 2n = 6 for B. During meiosis I, due to a meiotic error or due to the nondisjunction of the chromosomes, irregular gametes are produced. Nondisjunction of chromosomes refers to an event where a pair of homologous chromosomes fails to separate during meiosis I, leading to the failure of separation of sister chromatids in the subsequent processes of meiosis II and mitosis.

The irregular/hybrid gametes produced will therefore possess an abnormal number of chromosomes, i.e, instead of a haploid gamete with 5 chromosomes (2 from A and 3 from B), it can now possesses either 7/8 chromosomes. It will have 7 if A has shown meiotic error, but it will possess 8 if B has erroneous gamete formation. This hybrid gamete will then undergo meiosis II and mitosis and fuse with a normal gamete to produce a viable, fertile, and diploid alloploid offspring, with 10 chromosomes.

❍ In 1982, Gerhardt identified tetraploid populations of Hyla versicolorarising from breeding of diploid populations of Hyla chrysoscelis. He observed that these frogs could proliferate only by breeding with another with a similar ploidy. If a diploid and tetraploid frog did mate, it produced a triploid offspring that perished during the larval developmental stages. The rare individuals that survived were completely sterile.

❍ In the case of Cnemidophorus or whiptail lizards, progeny are produced via polyploidy. These lizards exhibit asexual parthenogenesis, through which they derive clonal reproduction of themselves, in turn making the male obsolete. Hence only females of this species are seen. The process of parthenogenesis involves inducing polyploidy in order to produce diploid eggs that later give rise to clonal progeny. They are otherwise sterile.

❍ In 1950, Owenby proved that the flowering plant Tragopogon miscelluswas produced due to the hybridization of T. dubius and T. pratensis.

❍ A species of hemp-nettle, Galeopsis tetrahit, is an example of polyploid speciation of two other species, G. pubescens and G. speciosa.

In recent times, intentional and artificial speciation can be induced via the use of selective breeding practices coupled with genetic engineering techniques. The problem of sterility can also be resolved by growing them in appropriate conditions in the laboratory and ensuring their reproduction via suitable techniques.
Related Items
16