Robert Rauschenberg , Tate Modern, London, review: My only quibble with this show is the horrible, emasculating Perspex encasing these pieces

In the first retrospective of the artist since his death in 2008, this exhibition celebrates Rauschenberg’s extraordinary six-decade career with work that shows a sense of humour and dynamism 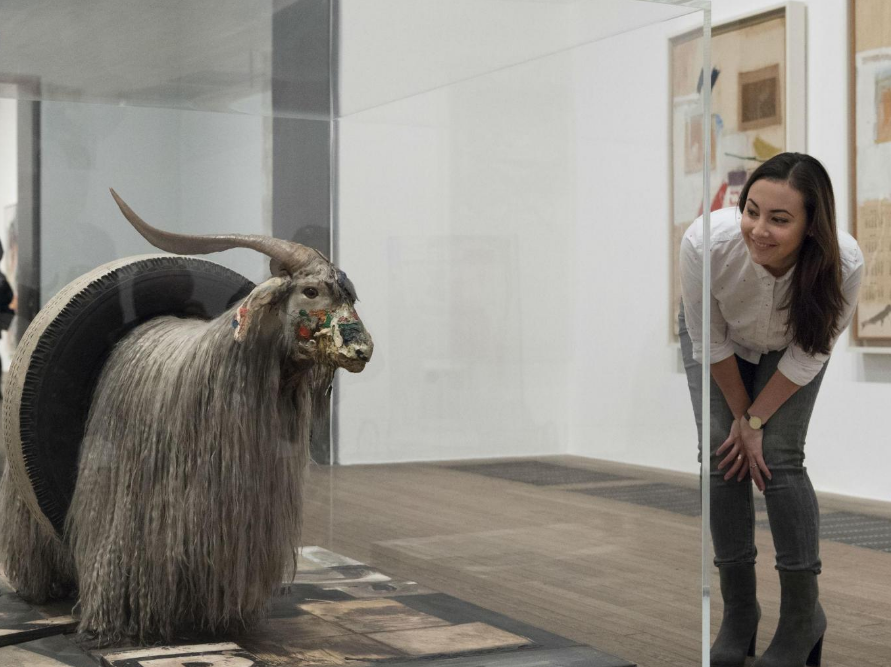 Diving into Rauschenberg at Tate – the artist’s first posthumous retrospective – I am struck immediately by an artist in love with experimentation and imbued both with a great sense of humour and energy. Rauschenberg was born in 1925 in Texas. He studied pharmacy before joining the army. His life changed in the 1950s when he attended the Black Mountain School, studying under the rigorous rules of colour theorist Josef Albers, who with the closure of the Bauhaus in the 40s had emigrated to America. Rauschenberg also studied in the Arts Student League in New York City where he met Cy Twombly, whom he would join in Europe and with whom he would allegedly have an affair. At around the same time Rauschenberg met and married artist Susan Weil and they had a son together. They divorced after it became clear his sexual interests lay elsewhere. He also had an affair with fellow artist Jasper Johns.

Perhaps reacting against the strictures of Albers, Rauschenberg infamously obtained a de Kooning drawing and erased it. He carried his art lightly, traveling in Europe with Twombly and making work with whatever materials he could find. He showed works made of cardboard in Florence, dumping his unsold works into the Arno at the end of his exhibition.

Many consider his combines created in the 1950s as his greatest works and there are plenty here, including both ‘Monogram’ and ‘Bed’, perhaps his most famous. My only quibble with this show is the horrible, emasculating Perspex encasing these pieces. You get the feeling that the absurd financial values now attached to them – forcing conditions by the lenders – would have made the artist furious. ‘Bed’ is a bed, but it is no ordinary bed. The apocryphal story is that Rauschenberg ran out of materials to paint one day and turned out of necessity to his using own bed. Whether this is true or not- and I think not.  Rauschenberg has taken the ‘idea’ of bed and transformed it into a great sculptural object. When you describe ‘Monogram’, a stuffed goat (purchased from a charity shop) encircled by an abandoned tyre, standing on painted cardboard, with a tennis ball and a shoe heel, it is hard to anticipate the transformation that paint, thought and energy can do to these ingredients, elevating them to perhaps the single most potent symbol for contemporary art.

He was a generous collaborator and EAT, a group formed of eventually over 800 engineers and artists, made many popping works. Perhaps the star of this exhibition is ‘Mud Muse’ (1968) a work never before shown in the UK in which 1000 gallons of clay and water bloop and splurt; the sounds are captured and magnified forming a transfixing audio track for the visitor.

Rauschenberg collaborated with dance companies including Trisha Brown and the Merce Cunningham company, and there are monitors chronicling how the dancer enlivened the art and vice versa. And the creativity does not stop. Towards the end of his life never tiring of travel he formed ROCI  (Rauschenberg Overseas Culture Interchange).  ROCI was named after his pet turtle and almost self funded and led to Rauschenberg travelling to countries where he identified difficult artistic environment.Trips to China, Cuba, India and Tibet included  buying local wares and incorporating them in his work. I met him in London in the 1980s before his show at Tate and took him out to lunch at Tate Britain. I was told the Tate would pay for the lunch but I still remember the stern admonition to limit the wine to not more than £80, which is those days was virtually a fortune. It was lucky in fact as Rauschenberg loved a good tipple and conversation, and I loved meeting him.

If I were an artist and I visited this exhibition I would be plunged in despair. All the young earnest artists receiving accolades such as Helen Marten, (shortlisted this year for the Turner Prize) now combining abject materials should visit this show and learn how it can be when done with humour and power. It has all been done before and much better!