Understanding Nitrogen Cycle with a Diagram

16
Understanding Nitrogen Cycle with a Diagram 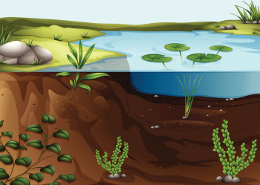 If you take a look at the composition of air, you will find that approximately 78.084% of the atmospheric air is composed of nitrogen (represented by the chemical formula, N2). The percentage concentration of this element is maintained at a constant rate with the help of nitrogen cycle. In this cycle, nitrogen from the air is assimilated by living organisms (plants and animals) and returned to the atmosphere through various processes.

As we all are aware, nitrogen is a crucial element for the survival of all living beings. It is an integral component of amino acids, proteins, and genetic material (nucleic acids). In case of plants, nitrogen is also a major essential nutrient, present in the chlorophyll molecules, which are responsible for carrying out photosynthesis.

The Processes Involved in a Nitrogen Cycle

The atmosphere is the largest reservoir of nitrogen. Other pools of this element include soil and oceans. Nitrogen in the atmosphere (N2) cannot be used directly by plants. After conversion of this element into usable compounds, plants absorb them and transfer them to the animals. Nitrogen from the plants and animals are recycled back to the reservoirs through dead and decayed wastes. Refer to the simple diagram of this cycle for a better understanding of the processes and steps that occur in the nitrogen cycle. 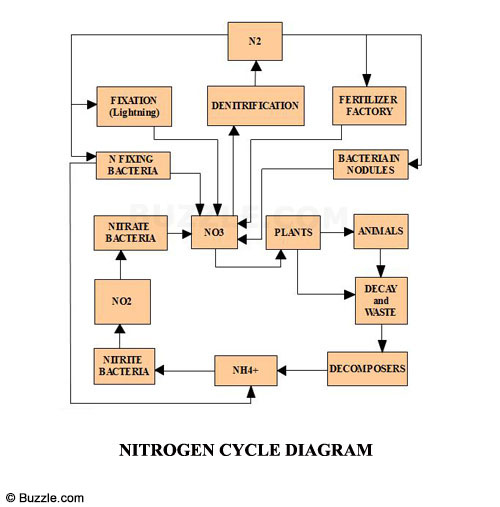 Nitrogen Fixation
The chemical nature of nitrogen gas (with triple bonds) makes it unusable in its elemental form. Thus, atmospheric nitrogen is fixed as ammonium by means of lightening (natural fixation), microbes (biological fixation), and under high pressure and temperature (industrial fixation). Nitrogen is also converted into nitrogen oxides (NOx) by burning fossil fuels.
Nitrogen Assimilation
Nitrogen in the soil is contributed by application of plant manures and fertilizers. Nitrogen from the soil reservoir is absorbed by some species of plants in the chemical form of ammonium or nitrate ions. Animals, on the other hand, derive their nitrogen requirements by consumption of plants and other organic matter.
Nitrogen Mineralization
Also known as ammonification, the organic form of nitrogen from the animal wastes, dead and decayed living organisms is converted into inorganic form. In this nitrogen cycle step, decomposers (bacteria and fungi) act on the decayed organic matter containing nitrogen and convert it into ammonium (NH4+).
Nitrification
By the process of nitrification, the ammonium ion, NH4+, is converted into nitrates, NO3–, that are absorbed by plants. First, ammonium is oxidized into nitrites, (NO2–), which are further oxidized to form nitrates (NO3–). In this process of the nitrogen cycle, oxygen is essential for the conversion of the nitrates by nitrifying bacteria (mostly soil bacteria).
Denitrification
Denitrification is the process wherein nitrates are converted to the molecular form (N2) in an anaerobic condition by the process of reduction. Heterotrophic bacteria and autotrophic denitrifiers are responsible for carrying out this step of the cycle. This marks the end of the nitrogen cycle, in which molecular nitrogen is returned to the atmosphere and soil.

The natural operation of this entire cycle is greatly influenced by human intervention. For example, supplementation of soil with fertilizers changes the nitrogen level in the soil, which disturbs the nitrogen cycle to some extent.